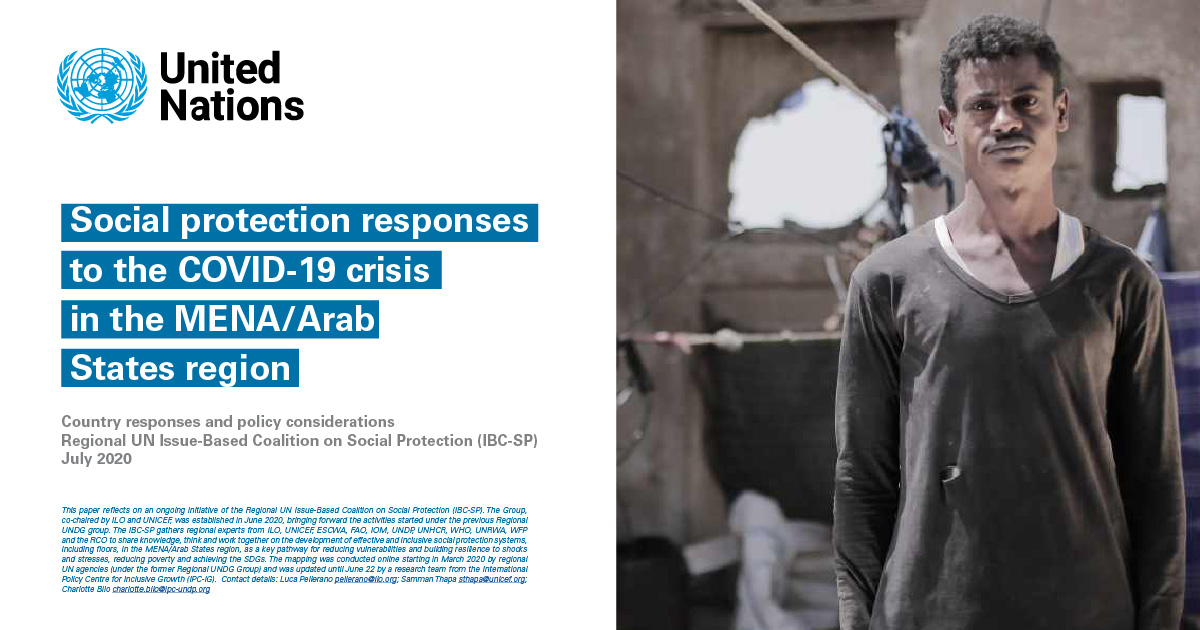 A Technical Note titled “Social Protection responses to the COVID-19 crisis in the MENA/Arab States region” was just published by the IPC-IG and by the Issued-based Coalition on Social Protection (IBC-SP). It is a mapping that provides information on the social protection measures taken in response to the global pandemic in 21 countries of the Middle East and North Africa (MENA) region, focusing on State-provided social protection, as well as benefits and services provided by UN agencies (as of June). The study covers four main topics: social insurance and labour market interventions; social assistance; special measures for foreign refugee workers and for internally displaced people (IDPs); as well as changes in administrative and operational procedures of social protection programmes.

The mapping was initiated by members of the IBC-DP group, which is co-chaired by the International Labour Organization (ILO) and United Nations Children´s Fund (UNICEF) and was established in June 2020. The IBC-DP gathers regional experts of several UN agencies to promote the development of effective and inclusive social protection systems, including floors, in the MENA/Arab States region. As part of the technical project developed by the IPC-IG and UNICEF´s Middle East and North Africa Regional Office (MENARO), IPC-IG researchers Charlotte Bilo, Joao Pedro Dytz and Lucas Sato collaborated and finalised the publication, which is available here. The highlights can be found in a special Twitter thread, which summarises important aspects of the mapping.

1/ Acknowledging the critical role of #SocialProtection (SP) in preventing people from falling into poverty & food insecurity as a consequence of the #COVID19 crisis, countries in the #MENA region have implemented a variety of SP measures. pic.twitter.com/DgwkEDlGTp